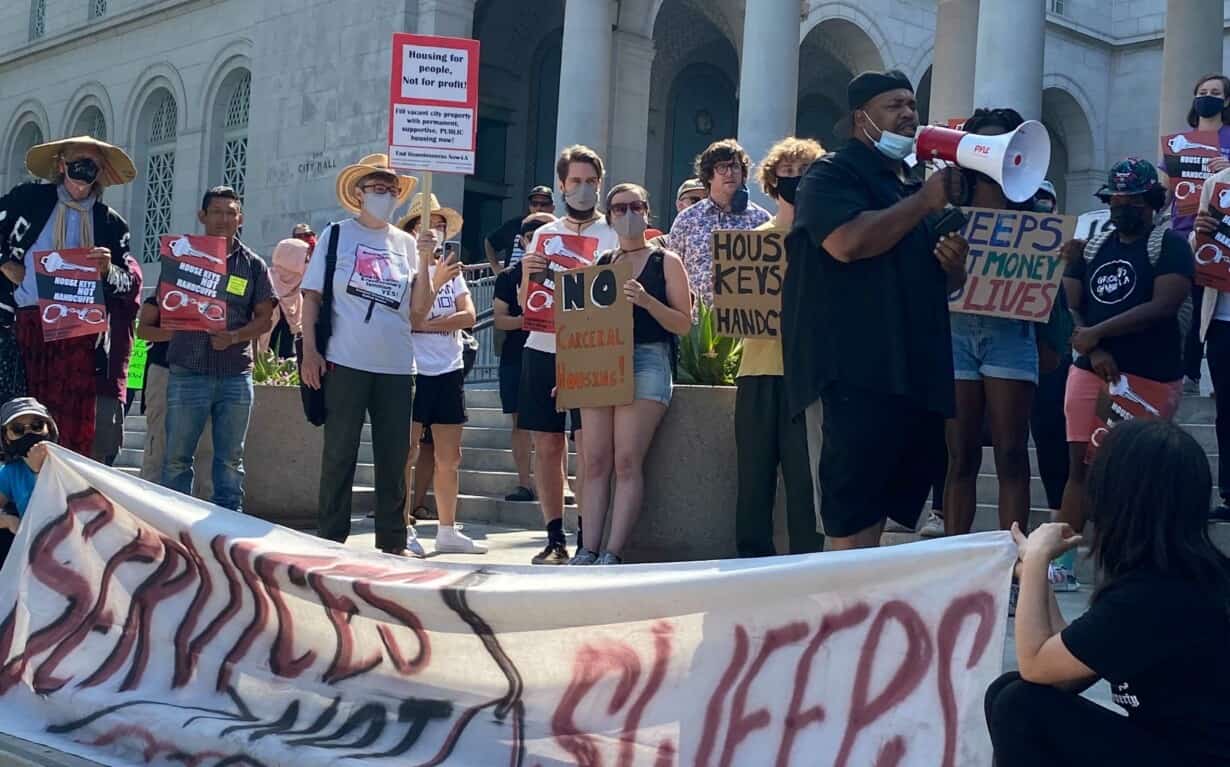 The newly amended Section 41.18 of the Los Angeles Municipal Code reads like a combination of: 1) political pettiness; 2) a grotesque overreach of power in order to banish the visibly growing population of houseless Angelenos; and 3) a return to failed strategies and tactics that simply push the problem from one district to another, essentially guaranteeing incarceration, use-of-force, litigation, and death,

Senior Assistant City Attorney Valerie Flores (author of the amended ordinance) has pushed aggressively over the years for many of the elements found in the latest version of Section 41.18. She’s actually pushed for even more draconian measures in the past, but that’s writing for another day.

The amendment is very clear in its intent: to remove any visible signs of houselessness within the 503 square miles that form Los Angeles proper. Period. The lofty rhetoric about its “kind” and “humane” approach does not match the cruel reality of what this amendment will actually do.

The ordinance makes it very clear that there will be no “sitting, lying, or sleeping, or … storing, using, maintaining, or placing personal property in the public right of way.”

It then goes further to prescribe the distance houseless people must be from an exhaustive list of places where houseless people are forced to reside: utilizable driveways and loading docks; operational or utilizable buildings; any permitted event (clearly a nod to Film LA); bike lanes and bike paths; parks, schools, libraries, or otherwise designated as a “sensitive use” facility; freeway ramp, tunnel, bridge, pedestrian bridge, subway, wash, spreading ground, or active railway; or, anywhere near (1000 feet) of a facility opened after January 1, 2018 that provides shelter, safe sleeping, safe parking to houseless persons or that serves as a navigation center.

For good measure, the ordinance also lists the distance houseless folks must be away from fire hydrants—2 feet, in a city that fails to provide any public health infrastructure for the unhoused, and is particularly lacking in access to water and sanitation.

And if by chance houseless people found a loophole in the aforementioned list of segregationist borders and boundaries, Section (4) is intended to be the “catch all.” It allows City Council, by resolution, to designate individual areas that can be cleared for up to one year.

Many, but not all, City Council members want you to believe that this is not a criminalization ordinance. After standing up—and kneeling—for Black lives, it would be too stark a contradiction for their political aspirations. On the other hand, some Councilmembers are clear in their intent to make the plight of poverty criminal.

Section (e) makes clear that anyone who “willfully resists, delays, or obstructs a City employee from enforcing this section or who willfully refuses to comply after being requested to do so by an authorized City employee shall be subject to the penalties set forth in Los Angeles Municipal Code  (LAMC) Section 11.00.”

1) this gives “authorized” City employees police powers and allows them to determine and define (in their opinion) what constitutes resistance, delays, obstruction in the process of taking personal property from houseless people. This is an expansion of the police state and gives everyday civilians extraordinary decision-making power over other civilians. There are of course legal questions to consider, but tipping your hand too early is never a good idea.

2) As written, this portion of Section 11.00 is a misdemeanor, a jailable offense that includes fines. So, if you protest or resist your personal property being taken from you by an authorized City employee, you risk being thrown in jail.

On the issue of the increased resources that might be granted to the Los Angeles police department for enforcing the amendment, we must note of the $117 million in 2017 that purportedly went to homelessness, 80% instead went into the coffers of the LAPD.

Council members will surely attempt to sidestep the misdemeanor set forth in Section 11.00 by pointing to Section 11.00 (m), which is an infraction. They’ve reserved the right to use section 11.00 (m) in instances other than protesting or resisting the taking of your stuff.

Let us be clear—an “infraction” should also be seen as criminalization. 11.00 (m) has fines attached to it. When fines are not paid, further legal action ensues including civil fees, lost licenses, etc. Administrative citations and processes are used to track, surveil and force you into Hobsons Choices.

In short, this ordinance is a return to Los Angeles’ tried and failed practice of criminalization. This is a wolf in wolf’s clothing. This a Jim Crow, Sundown Town, segregationist throw-back that unless voted down or defeated will result in many harsh days ahead. All this while we await the arrival of new houseless Angelenos devastated by the economic impact of covid-19.