A statement from the Downtown Women’s Action Coalition (DWAC) on Judge Carter’s injunction:

Judge Carter, in his preliminary injunction (LA Alliance v City of Los Angeles), details a number of the harms and injuries that Black people have suffered, how they’ve been set back and in some instances, who’s to blame. He discusses the impact of homelessness on women, lifts some experiences of Black women and provides examples of why shelters are dangerous and BAD for women.

Curiously, in his conclusion however, he prescribes a spectacular serving of the same paltry offerings that he earlier criticized. Forcing women, with what he hoped would be immediate effect, into inadequate shelter living. Why the preceding 90+ pages acknowledging the quicksand land of racial injustice? Was this just a wordy pacifier? A distraction for the gut punch looming in the ‘grand plan’ for DTLA’s Skid Row? A prime location inhabited by the Black people he says have been wronged for too long? And while protecting business community heavy plaintiffs from irreparable injury, an all too familiar trade-off appears: uproot the unhoused, at lightning speed into …shelters. Starting with women and children. Because, ladies first.

We are opposed to: anything less than an offer of PERMANENT, DIGNIFIED, AFFORDABLE [to those who have had everything snatched from them (land, rights, lives) who, as a result, have zero income] HOUSING. Any solutions must correct and repair the intentional and deliberate harms done to poor, Black communities.

Anything short of this is a slap in the face of racial justice; a continuation of structural racism and a blatant disregard to the need of unhoused Black women in Skid Row (who have suffered inconceivable trauma) to be safe and have equal access to healthy living. Who in fact, want not merely to survive but the opportunity to THRIVE.

Being unhoused, on the streets is not a choice. It doesn’t occur because “she made bad decisions”, “she’s an addict… got mental health issues… doesn’t want housing”. It occurs because of organized, widespread, racist legislative and judicial leanings which created an unjust reality that permeates EVERY institution in our society.

A set of rules exist, a practice understood and adopted by ALL government agencies that Black people mustn’t make it. So the disproportionate number of Black women you see on Skid Row, is not by fault or choice of the women, it’s by will and choice of those who run our cities – it’s intentional. Black women have been locked out of the housing market, rejected by the education system, suffer discrimination in employment, pursued by law enforcement, denied healthcare, experimented on, had their babies stolen…All agents of the system got the memo.  All operate with impunity, because protectors of the status quo will always find them to have acted reasonably and within their rule books.

Black people have suffered a rampant denial of EVERYTHING that you need to lead a healthy, prosperous, free life. This unimaginable violence takes its toll, it alters your DNA and leaves an imprint in your mind on your spirit, body and soul. The denial of being human (which Black people have been continuously denied, and remember, Skid Row is predominantly Black) is one of the deadliest, sustained, uninterrupted programs of terrorism in the US.

DWAC have undertaken numerous studies on the needs of unhoused women in Skid Row, who are, yes, overwhelmingly Black. At the top of all their needs is permanent, dignified, housing. Our reports illustrate anything less than that puts women at risk and ignores the structural causes and deliberate, violent, systemic operations that put women on the streets and keeps them there.

Women have given countless reasons as to why they feel unsafe, disrespected and unwelcome in shelters – it’s not permanent, it’s not theirs and they are treated like an unwanted criminal in these environments, many even losing the most precious of gifts in shelters – their babies. Our surveys have found that few women move from shelter to housing, so shelters do not help houseless women to find permanent housing.

ALL power yielders, who make decisions that affect our lives, don’t get to write about or give speeches on structural racism, segregation, redlining, racist policing …or proclaim that Black Lives Matter while their actions hold up and reinforce the systems they denounce.

We see past the trickery, naming something doesn’t equate to or establish a commitment to being against it. Actions specific to Skid Row offer no real help or remedy. If you talk about justice for Black people, you have to talk about repairing the harms. Inadequate housing and more policing do not repair harms. Shelters do not end homelessness. You cannot claim to end homelessness by forcing people to go to shelters. Instead, you are just moving people out of sight to satisfy business interests.

Women have been loud and clear about their experiences and their needs. If the Judge is truly committed to justice for women in Skid Row, he’ll push for what they recommend, not what business owners and gentrifiers want – which is to not see them; to have them taken away, and to make it illegal to come back.

We see the set up and we’re here for the fight. It’s OUR lives. 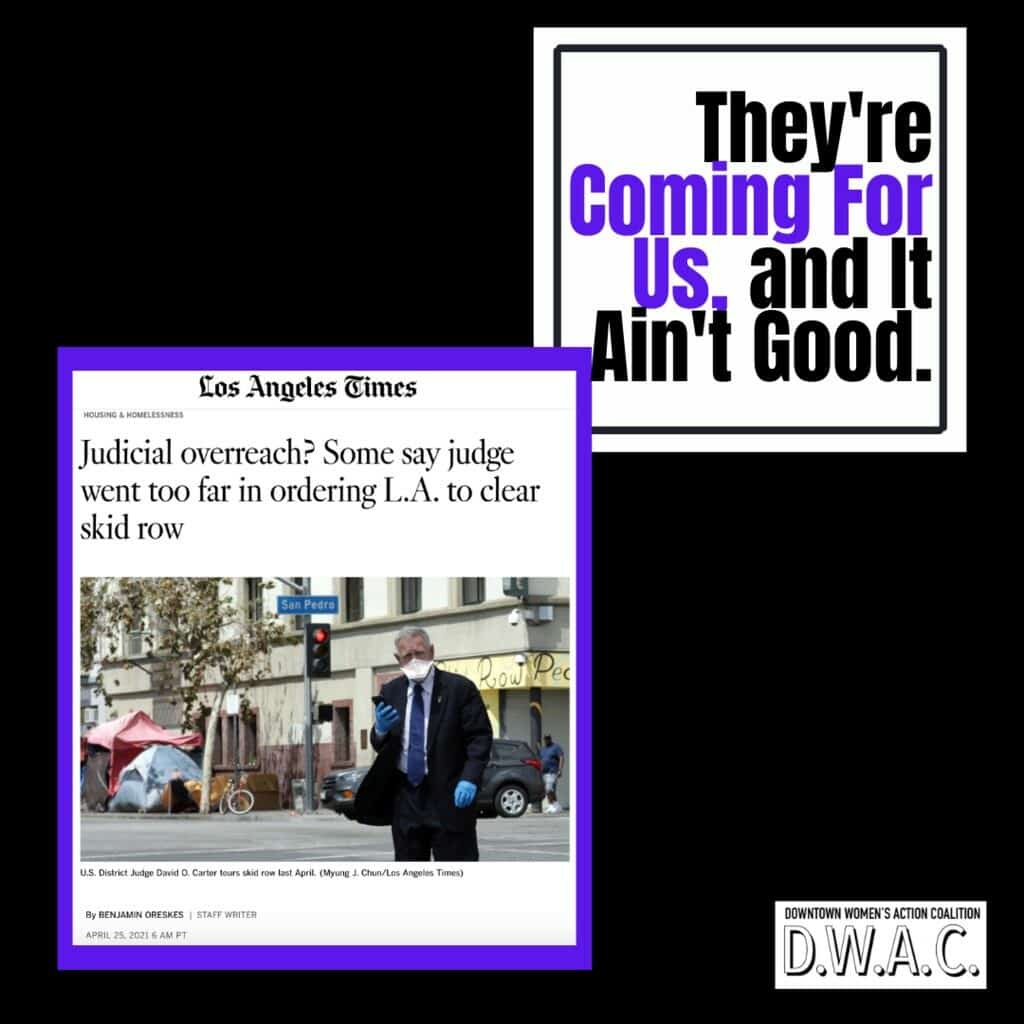